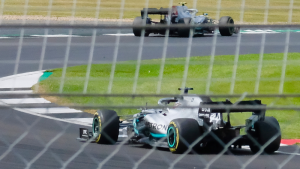 25 Jul 2019
This July we were thrilled to send some of our loyal customers to the Formula 1 British Grand Prix at Silverstone. Our prize winners had a fantastic time watching Lewis Hamilton take first place for Mercedes; as well as becoming the record holder for the highest number of wins at the iconic track.

Here's what our winners had to say about the day:

"My wife has had her car serviced by Mercedes-Benz of Taunton for years. Imagine our surprise when she got an email advising that she had actually won the prize draw, two tickets for the British Grand Prix! My son and I have always been a huge fans of Formula 1 and have especially followed the rise of Lewis Hamilton to his current #1 status. Everything about the day was absolutely brilliant. From the very start the superior power of the Mercedes cars was evident along with the incredible skill of their drivers; nobody was going to get near them! At the end of the race, on his lap of honour, we were all delighted when Lewis brought his car right in front of us as a "thank you" for the support!" Michael Dearden

"It was an amazing day, couldn’t have done anything better and seeing the guys in the car was fab. Never in a million years did I think I would go to the Grand Prix. I had been following the team for ages then when I entered the competition and won, it was so exciting! An absolutely brilliant day, the highlight was seeing Lewis Hamilton win, and being able to walk the track after the race. I found the whole day very overwhelming and still cannot believe I’ve been. I even had my nails painted in team colours!" Andrea Dallen

"Two free tickets for the British Grand Prix! I took my Royal Marine son who had never been to a Grand Prix. Alarm set for 4am! Shower and coffee and set off for Silverstone. We went to the Formula 1 fan zone area, had a bacon bap and coffee then went back to purchase T-shirts for the grandchildren. Then I heard engines - a magnet to my ears - so we walked over to the Wellington straight to watch F3 cars racing into Brooklands bend. There was a great sense of speed as we were very close, and louder than the F1 cars- brilliant! We were entertained with parachute display team - Red Arrows and the Porsche super cup. The day also included an MG car club drivers parade, and a few F1 drivers decided to sit on the backs so we could see them well. Lewis was one of these, driven by his father with his brother in the passenger seat and Lewis playing to the crowd! The Grand Prix was entertaining with some very close racing. The seats we had were great, see up the Hangar straight, around Stowe, pass the pit entry and into Vale. Truly great seats, given to us by Mercedes. The race was spectacular and some great overtakes and defensive driving. The best result for the Mercedes Team. All the people in stand A were very vocal and cheered the Merc team. Memories of a fantastic weekend thanks to Mercedes" Robert Grainger "We had a great time, and were pleasantly surprised at the thought that Mercedes had gone to in order to ensure everyone had what they needed for the day. It was quite an experience being there…To try and make you a little jealous, here’s a glorious picture of three Mercedes in one view"

Your could be next:

We like to reward our loyal customers whenever we can, and hold several prize draws throughout the year. Look out for competition emails from Mercedes-Benz to be in with a chance of winning. You can update your contact preferences on our website, to make sure you're signed up for our emails.
© 2022 Mercedes-Benz South West | VAT Reg. No.: 945 6630 01. Registered in England. Co. Reg. No.: 4306194