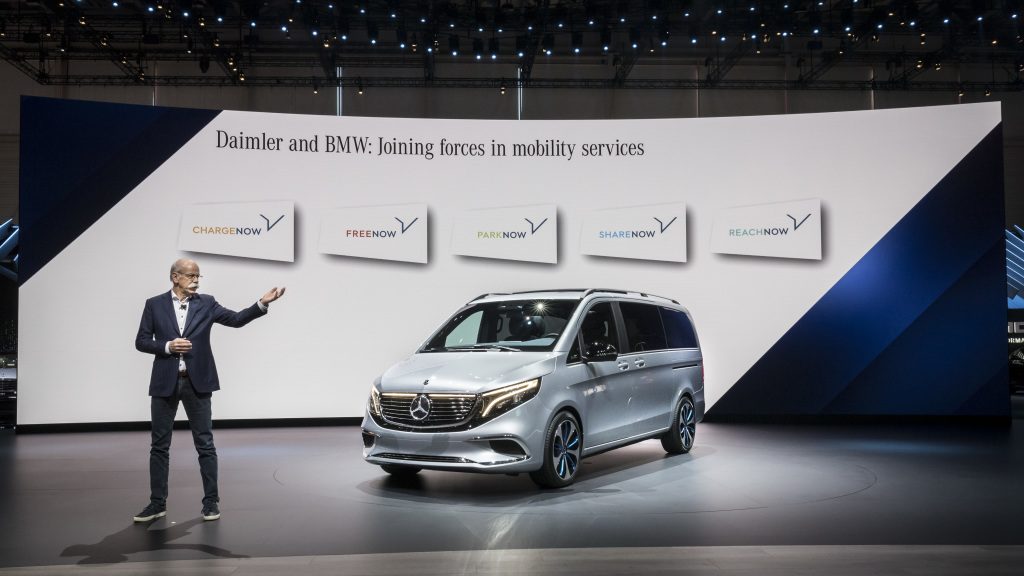 07 Mar 2019
The Geneva International Motor Show is a highly anticipated annual event where the A-Z of car manufacturers showcase all that’s worth knowing about their brands. This is the place to be to find out all of the newest models and technology in the Automotive World. The show didn't officially open to the public until the 7th March, but press and industry bods alike were invited for a sneak peak. Head of Mercedes-Benz Cars Dieter Zetsche took to the room to present the newest innovations at Mercedes-Benz. Informing the crowd of some big developments, notably the joining forces of Mercedes-Benz and BMW both in Mobility Services and Autonomous Driving Technologies, this is an exciting venture to look forward to from both parties. Dieter explained that this is a chance to create products with the highest safety standards, with both brands sharing a common goal of creating an outstanding customer experience. We’ll just agree to disagree on who manufactures better cars! Moving on to the vehicles… The Concept EQV

Dieter Zetsche with the Concept EQV

It’s not common practice for a van to be the first vehicle shown during a presentation at the Geneva Motor Show, but Mercedes had something they had to show; the All-electric Concept EQV. This is our first electric van built with all forms of family in mind. The battery is built in the vehicles under body, and is done so that space is not compromised and customers can enjoy all of the spacious interior. Highlights include rapid charging for a range of up to 100 kilometres in just 15 minutes. With a total range of up to 400km, distance travelled need not be a worry either in this emission-free ride. The New GLC

The facelifted Mercedes-Benz GLC, was presented by Arne Wiebking

With 1.5 million units sold in the last decade, the GLC is Mercedes-Benz’s most popular SUV, and it was important to make sure it remained so with these new developments. Design is key with the new GLC, with the new model showcasing a sporty new look in front and rear. Attractive new wheel designs also add to the look, with sizings going all the way up to 20inches. LED headlights and taillights will come as standard. Also coming as standard? MBUX with ‘Hey Mercedes’, now controllable by voice, touch or gesture. The new GLC will also have a completely new engine line up, available in petrol and diesel. One thing is for sure, it will be both more powerful and more efficient. With all these improvements, we hope the success of the GLC in the last decade will continue into the next! The New CLA-Shooting Brake

Mercedes-Benz designer, Slavche Tanevski describes the new CLA in one word: Seductive. Due to it’s dramatic proportions and slick silhouette, it remains like no other on the market. The aim was to find the perfect balance between dynamism and usability. The car is wider, longer and lower. This is especially visible in the front, where the ‘predator face’ looks towards the road; achieved by the long shark nose, sporty grille and headlights. It’s as intelligent as it is beautiful with its improved MBUX operating system and it’s set to be a real head turner on the road. We hope this will be a real front runner as a style icon in the particularly competitive world of compact cars. Ask Dieter to describe the CLA Shooting Brake in a nutshell?  A “Rolling work of art… Plus Storage.” The brand new Mercedes-AMG GLE 53 4MATIC+

The GLE 43 gained worldwide acceptance as the first entry level model released by Mercedes-AMG in 2015, but the newest generation of GLE has had a makeover… and a new name. The GLE 43 has become the GLE 53. What’s in a name? Well in this case the new 53 brings with it fully variable all-wheel drive, an integrated starter generator and a higher output of power; 435 horses to be exact. This is before the starter generator kicks in and offers a further 22 horsepower. What many considered a ‘baby AMG’ has now become a fully-fledged member of the AMG powerhouse… a full-fledged AMG performance car. It’s also got many of the features you’ve come to love on our other AMG models; AMG steering buttons, AMG track pace and the switchable AMG exhaust. But more importantly, this is officially the first Mercedes-AMG GLE 7-Seater. It won’t be hard to round up people for a trip to the beach in this beast!

As mentioned by Dieter …. A company’s greatest assets are its employees, the second biggest asset for a car company being, of course, its great vehicles.  “Style has always differentiated our vehicles, and I promise, it always will.” We look forward to seeing these new models in our showrooms!