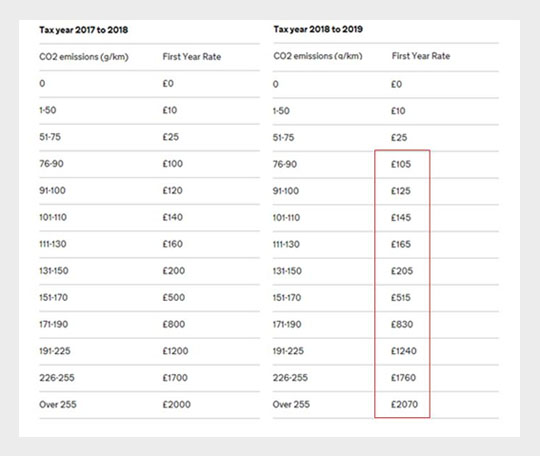 All you need to know about the 2018 vehicle tax changes.

16 Mar 2018
Philip Hammond delivered his second Budget as Chancellor of the Exchequer in November last year. It confirmed, amongst other things, that fuel duty would remain frozen for the eighth year in a row and that new regulations would be put in place to support the testing of self-driving cars without a safety operator. However, it wasn’t all roses for road users. Following on from the dramatic changes to road tax calculations that came into place in April 2017, the Budget outlined further plans to penalise car owners based on their vehicle’s emissions.

As of April 1 2017, millions of drivers faced increased vehicle tax contributions as a result of revisions to the law regarding both petrol and diesel cars. It saw a rise in first year contributions and set a standard rate of £140 thereafter for newly registered combustion cars. If the value of your new car, however, surpassed £40,000 this figure rose considerably to £450 yearly. This reflected the government’s commitment to improved air quality within the UK. It was a move to direct car buyers towards the electric alternatives that remained exempt from paying any vehicle tax at all.

There are two parts to the legislation that comes into effect from 1 April 2018. The first simply adds to the increase in first year vehicle tax rates that we witnessed last year. It affects cars with C02 emissions level of 75g/km or more and could, once again, therefore affect petrol or diesel cars.

The second change applies only to diesel vehicles. It sees a new standard introduced to control levels of Nitrogen Oxides (NOx) emitted by diesel cars: those that pass are subject to the same first year increases as noted above, those that fail or remain untested are penalised with even greater charges. These increases are equal to one vehicle tax band higher than the vehicle in question. This new standard is known as the Real Driving Emissions Step 2 (RDE2) test. It now forms part of UK Type Approval testing and its predecessor, RDE1, was introduced in September 2017. Together, they dictate that no more than 0.080g/km of NOx should be emitted by a diesel car.

You can find out more about the tests and how they work here.

How does this affect me?

Part one means anyone choosing to purchase a vehicle with CO2 emissions of over 75g/km after April 1 2018 will be required to pay increased vehicle tax in their first year. For the time being, the higher charges outlined in part two will apply to all new diesel cars. This is because RDE2 testing cannot commence until certification for the new standard is implemented. And, because it wasn’t due to arrive until 2020, manufacturers have not yet had the opportunity to test or approve their vehicles. Mercedes-Benz expect to be able to commence RDE2 testing on their vehicles in early 2019. Until that point all diesel vehicles will be charged at the higher rate. If you would like advice on how this affects you and your next purchase, contact us today.

Do you want to receive articles like this one straight to your inbox? Sign up to our monthly newsletter.